NOTE to the readers: I wonder of there ARE ANY? Make yourself known: on5zo@hotmail.com

Isn’t it a crying shame that this absolutely does NOT reflect on the air?

I started the ARRL 10m contest yesterday with high expectations. But it took only 5 minutes to realize it’s not ‘here’ yet. Little signals, only noise and lots of repeats for the serial number. I tried 17m and worked the usual UA / UR and a ZL who wasn’t weak. No JA though.

Exit the shack. Enter the laptop.

Processing QSL
Finally I finished processing that huge pile of OQ5M QSL cards.
I tried my homebrew QSL Manager Processing Tool that adds the QSL_VIA field in ADIF using my DX4WIN QSL Manager database. I submitted a sample of my output format to the guys at Global QSL and got a final ‘GO’. So I ordered 1k cards which is really a bargain especially with the favourable Euro-Dollar exchange rate. No more printing labels, sticking, sorting, putting in boxes, driving to the local club to hand the outgoing batch to the club’s QSL manager. Over are the days – just some electronic processing and off we go. Yes!

I uploaded my ADIF and got a minor error. It seems that when copy-pasting a QSL manager from QRZ.COM there could be a problem with an illegal zero. If you look up 5J0A you get WØJAR. Note the slashed zero which isn’t accepted by GlobalQSL. It took me five minutes to add a function that removes this slashed zero and replaces it with a regular zero (0). Reload the ADIF et voilà: 759 QSO’s confirmed and sent via the ‘buro’. That’s a lot of labels! Or better: that WOULD have been a lot of labels.

Crunching numbers
For a while I’ve been thinking to get some statistics out of my logs since I got on HF in December 2000. That’s a lot of work in DX4WIN (I really can’t say much positive about this anymore) and you still need to calculate. So now that I’m on a programming roll, I decided to tackle that and wrote me a tool. It is still VERY MUCH under development and the current release is something like ‘minus zero point 1’. You can see what it looks like below. 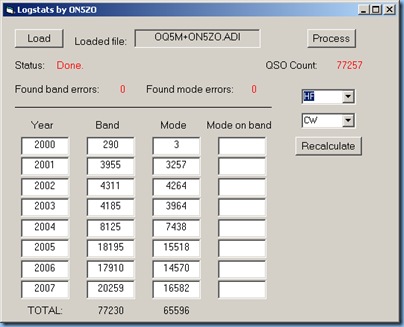 This clearly shows a couple of trends:

I need to work on this tool to get a more usefull output but I’m glad I got the engine working. All for now, more later. 73!

All Quiet on the Western Front

Well, not quite. There have been serious stormy winds coming from the west. Last Sunday was afwul, it was a minor storm. Lucky me that came a week later or WW CW would have been wasted. The coming days aren’t looking any better. I don’t have the time to play right now (work to do, XYL’s birtday, need to catch up on QSLing etc) but I hope next week the WX will settle and finally bring us winter: cold but dry and as a cherry on top: blue skies? Then I’ll be cruising down 40m and 80m again…

In the CQ WW aftermath:

Next weekend is the ARRL 10m contest. I don’t think I’ll be making many contacts in what will be my favourite contest in a few years. SFI sustains above 70 for a few days in a row now but we need a hundred more SFI-points to make 10m swing. Bring on the sunspots, please!

First of all: a BIG
THANK YOU to my XYL who supported me during this weekend by checking how the
score progressed once in a while and feeding me in a timely fashion. That and
coping with my pre-contest stress and a garden full of aluminum and copper
wires. I would never enjoy this hobby without her approval and support. But I
would never stop contesting.

My target? Based on
last year: 3000 QSO and I was shooting for 3M points. A bit too optimistic since
10m was dead and 15m was poor at best. You can see the comparison with last year
in the picture below.

Lowlight: ZS4TX asked to move
from 40m to 80m but his proposed QRG was occupied by two ragchewers so that
didn’t work out. Bummer!

All for now, need
to clean up the shack and the garden and catch up on postponed
duties.

Remember my earlier post about XP acting up the week before CQ WW SSB? That one showed up again TODAY at 1200utc. Hit PANIC button! Right before CQ WW with less than 12 hours to go? This must be an anti-contest bug somewhere in XP. The message is that explorer.exe generates an error. Not Internet Exploder but the Windows (system) explorer.
System recovery didn’t help and Google showed many hits of a gazillion people being bugged by this yet no solution. A link pointed to the MS website but it was of no use. The symptoms they described were there but the causes weren’t and the solution offered didn’t help or was impossible to do.

Now what? Format C: and reinstall? With half of my antenna setup left to do this was hardly an option. One of the links pointed to Media Player so I downgraded by removing Internet Explorer 7 and Media Player 11. To no avail.
Another link told me to run "sfc /scannow" from the command prompt with the XP install CD in the CD reader. That did the trick but it took almost an hour to complete the process. Add to that the full hour lost to get to this point. I now have auto-updates disabled for the duration of the contest. I’ll look into this later on. First concern now is to survive the contest without PC problems. Fingers crossed!

Tower is up, all antennas are up, the 2el 40m sloper system shows gain and F/B and the 80m antenna was a pain to set up in the wind. Ideally this is a two man job but since I was home alone this afternoon…
I decided not to use the auto-tune solid state amp after all. Retuning / QSYing goes too slow and I don’t want to risk damaging another person’s amplifier in the heat of the battle. SWR is flat on all bands so the second rig will put out 100W and not fold back. I’ve done it like this for over a year so it’ll work out this time too.

In fact countdow started 364 days ago but who’s counting?

To do when I get home tomorow:

I also got hold of a second amp (autotune 500W) for the 2nd radio. I’m
not sure if I’ll use it – very tricky to tune and doesn’t tune my 160m
antenna at all. I need to think that over.
So that’s it for now. Next update will be on Monday. I hope I can be euphoric and happy then. My only worry is the WX. Forecast says windy but not too much so let’s hope they’re right. WX is the only show stopper here unless Murphy trikes?
73 / CU in the contest! Work me, log me, spot me – OQ5M QRZ?