I didn’t do much on-the-air radio in May. I got some antenna work done to get a second antenna on 15/20m again for SO2R. In anticipation of this contest.

Feedpoint of what is to become a new multiband vertical antenna. Made entirely out of salvaged parts and junk from abandoned antennas and projects. Upcycling from base support to antenna tip. Confinement means: not shopping for parts. I recently rediscovered the joy of ‘all band contesting’ so I need a second antenna for SO2R on the higher bands. Grab a local mult, check band openings but without abandoning the RUN QRG. It’s not a yagi but ANY antenna beats NO antenna. _____________________________________________ #cqcontest #hamradio #amateurradio #hamradioantennas #homebrewantenna #antennaporn

Phase 2: let’s dual band it. I added a second radiator: a copper wire for 21MHz. A few iterations of measure-calculate-adjust and both λ/4 radiators were resonating on the desired frequencies. A quick ‘on the air’ test was satisfactory. USA stations were workable under the current marginal conditions and EU stations were often louder on this vertical compared to the yagi pointing to USA. _______________________________________ #cqcontest #hamradio #amateurradio #hamradioantennas #hamradioporn #homebrewantenna #verticalantenna

I wondered how I would do compared to the SSB part a month ago. I landed just over 4 million points just shy of 2000 QSO. I targeted 3000 QSO in the CW part, just to prove that CW beats SSB any day.

The day before the contest, I installed some extra antennas:

I had a slow start. A  *V.E.R.Y.* slow start. The 40m band was full. I wanted to run bout found no place to park. I got on 7061 and then started a slow run with some 80m QSO on the second radio. The first hour went by with just passing the psychological barrier of 100 Q: 103 contacts is a slow start. Luckily I could keep this up for a few hours. The 80m was just OK. After sunrise I went to 28 MHz right away because that band was whopping. I scraped 9 contacts from the noise floor last month in SSB. I easily logged more than hundred early in the morning. That’s probably more than what I logged on 10 meters in all the contests of the three past years combined. This sun takes but it gave some this weekend too. I admit: it was mostly EU but it’s TEN and there were tons of prefixes. After that I had a good run on 15m too. Same feeling: 79 hard fought contacts in SSB and an easy +100 run this time. Thanks to the sun. Saturday afternoon I attacked the 20m band yielding the best hour of the contest: 130 Q/hr. That is not really a lot but it is what it is. I stayed on 14 MHz until late in the evening. I was surprised that the band was open this late supporting DX propagation. After that I went to 160m. This is not an important band in the WPX contest but the ‘fresh meat’ experience boosts the rate and there are some prefixed there that can’t be found elsewhere because of the SB160 guys. I didn’t stay long and spent the rest of the second night on 40m. That band gave rate, prefixes and 6-point contacts. What more can you ask for? 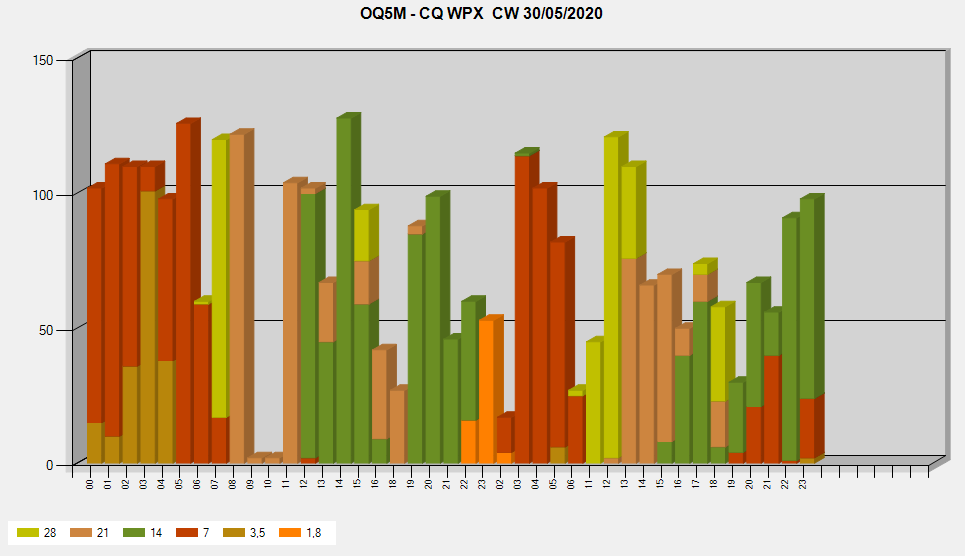 During the first part of the contest the K index had risen to 3. That was felt in the propagation! Typical situation: low K and good conditions the weak leading up to the contest. Right at the start the sun spits some garbage towards Earth that affects propagation. The ionosphere recovered slowly during the contest which was felt too later on Sunday. The sun gives, the sun takes…

I took the last long break on Sunday morning. The plan was to do the last twelve hours of the contest in one stretch. Extrapolation told me that 3000 QSO was possible if nothing went wrong. In the mean time I looked up the Belgian record for this contest in my category: 6.9 million points.

Set in 2002 (lots of sunspots) by DL2CC (German!) from the ON4UN station (big antennas). Beating this score was not really impossible but I would have to go after it with only ten hours to go. Challenge accepted!

A couple of decent runs on 10m and 15m followed. The decreasing K-index had some surprises in store: a few stations from California on 15m. Never expected: East coast was troublesome in the recent past, West Coast virtually impossible. And KH6TU heard me and we exchanged numbers. Booyaa! All this boosted the score and the 7 million mark was in reach. I had to build a good margin for the record to stand after log checking… That margin came in the form of a sustained 20m run to the USA. Finally some action! Three point contacts and a wealthy dose of new prefixes.

To finish the contest I sat on 40m for the double points. I grabbed a few stations on 160m and 80m with the second radio but decided not to spend more time there. 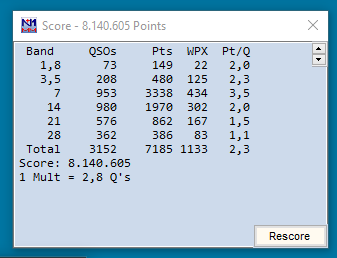 When the closing bell rang I was quite happy with a new claimed Belgian record. Especially since this had been set with BIG antennas way higher than mine (see it here), in a year when the solar cycle facilitated DX propagation. I have a small tribander, ineffective low band wires and only one small tower. Not to mention SFI=70 at best…

I had good fun on the radio in my preferred mode and heard lots of friends from all over the globe.

To John AE5X: your signal was just fine but each S7 DX signal is sandwiched between S9++ local signals here… Good to hear you!