Yet another lovely contest and I was there. The plan was to have fun, spend as much time in the chair as possible, and assess the bands to pick a Single Band effort in next week’s CQ WW CW.

Yes it was fun. I even did as much SO2R as possible. I don’t have a second antenna for 10-15-20 anymore. No need for that right now as 28MHz and 21MHz don’t produce much volume and I only have space for a simple second antenna. Style GP or vertical dipole. So SO2R was between 80-40-20. Or run 80-40 and use the yagi on 15m. Anyway my basic SO2R skills still keep me busy in the slow hours. But after 0000utc, it was just too slow and I took a break and got some sleep.

Fifteen? Spotty. Long haul DX to the east (VK, HS, 9M…) and UA9. On Saturday there was a handful of USA but not much. Closer EU and the target zone (LZ) was very hard to work. Skip too long and my antenna too high? I would not describe the 21 MHz band as open, but it could have been better if people just would try. The Reverse Beacon Network picked me up between 8000km and 14000km but only a handful of real DX found its way into my log.

Twenty meters was OK. I even put fifteen JA in the log. But it is not in great shape. When it’s open, it’s open but it doesn’t last long it seems.

Money band was 40m and that will also be my band of choice in WW CW next week. A few juicy multipliers in the log. KL7RA made me chuckle as I heard his fluttery tones coming back to my CQ. I was working USA with 500W at my local noon, so about 11AM UTC. Let’s hope for the same – or better?

Eighty was not bad either. Noisy and QRN. Africa’s north shore and between Sardinia and Italy over to 9A: thunderstorms. But once again the wire GP with tuned elevated radials turns out to be a very good antenna for its simplicity. The two RX loops help and they are key for low band operation. Diversity RX is king!

I was on the real time score board but the pecking order soon got clear. UP0L works the same stations as me, but he gets three points because he’s in Asia. I get only one point because I’m EU. 9A5Y probably has bigger antennas and a better location for LZ mults and points? Anyway this is what it was for the better part of the contest.

Late in the evening I had a good run on 7019.6. Then UR7GO starts CQing on top of me. His signal is S6-S7. The usual self defense mechanisms kick in but to no avail. He works EU but I hear literally nothing. Not one station he logs. Then it hit me: am I listening to his harmonic? I move the second rig to 3509.8 and there he is. Stunning: 1800km and his 80m harmonic is S6 or stronger on my 40m dipole… I made a video.

The morning was slow, very slow and I used the second rig a lot. I also tried CQing on two bands at once. Actually not at once of course, but interleaved, or dueling CQ or dual CQ or whatever they call it. I don’t seem like too big a lid as long as the calling stations stick to the routine and keep it short and snappy. But most of the times the synchronization gets lost soon and I have to abandon one of the runs. I think that this is very rewarding for me (thrill!!!) and it keeps me busy. But it is intense. By which I mean it wears you out. I don’t practice this in simulation and I don’t do it too often. Also I don’t have the antennas to do this. But it is fun on a modest scale.

Some medium-fast hours and since I was only active for about 17 hours of the available 24, I seem to hit almost 100/hr average. 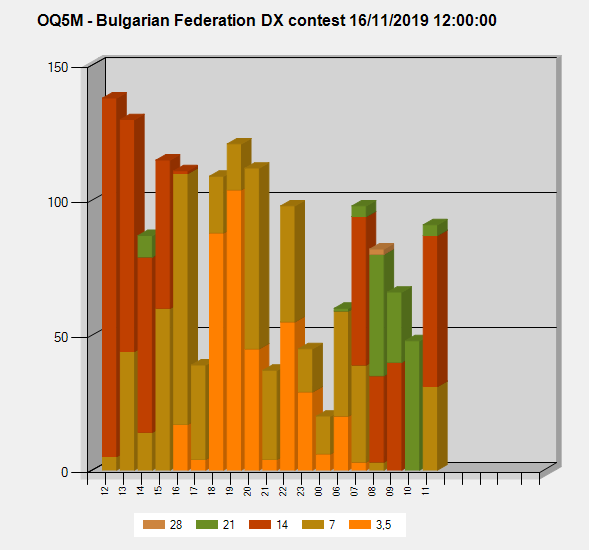 I had a good time. Contesting is so much fun. I really yearn for a gazillion sunspots and a low K.