My initial plan was to do SB80 for the fifth year in a row. So I installed the second RX loop to the east a week before the contest. Looking at the results, the only time that SB80 effort actually was good, was in 2015.

Since I was looking to maximize the fun parameter in the process, I eventually opted for a SB20 effort.

I thought that 2000 QSO could be possible on 20m. I was wrong. The sun decided to throw a handful of sand in the gears that make ionospheric propagation work.

RU f’ing kiddin’ me? The day before a major contest and the K index peaks at 6? Six? Oh boy, that’s gonna be tough going… Thanks for nothing, El Sol. Could collecting stamps be a fun replacement hobby? . #hamradio #amateurradio #cqcontest #cqww #solarweather #solarstorm

I set up the shack and cranked up the tower on Friday afternoon. The 20m was just plain dead. Not much signals, not much activity.

In the evening I worked TI7/KL9A who was also checking out things for the contest.

Look who I ran into. Mr. C, I love it when you call me Mr. F. That thing goes a long way back… For the normal people: this is my radio buddy Chris @chriskl9a who is one of the few guys who can win this weekend’s radio contest. You hear him catch the vibe from Costa Rica (TI7) working other #amateurradio stations. #roadtocqww

I started on Saturday morning and it soon became clear that the fun would have to come from somewhere else than ‘rate’ and ‘DX’. If your idea of fun is QRM, splatter, eardrum piercing adjacent signals and the likes, then you would be in for a treat. But it only makes me look for a towel to throw. I was in and out and off and on. Things were slow and there was not much exotic to be worked on Saturday. Still some nice mults managed to call me and make me happy: HC1/KW8N, HH2AA, 5K0K, VP9I… No KH6 or KL7 or ZL worked and only two VK and two or three JA.

There were less happy situations. Some guys really take up much real estate: UA3KW, RL3A, UW1M, KU2M – it can be done with less guys. Mult hunters in M/x setups are very rude in the packet pile ups. P33W, LZ9W and almost all 2×1 Italian calls: no patience, not listening, just use the brute force attack method to try to work the DX. Too bad it usually works.

Cockpit view with rare selfie picture-in-picture. I’d love to call it an ‘action pic’ but there is not much action going on. I’m a CW guy, stating the obvious. The 20m band is brutal in SSB. Maybe SB80 would have been better? #couldashouldawoulda Can’t wait for the CW part to unleash the contesting animal in me… #hamradio #amateurradio #cqcontest #cqww #hamradiocontest #hamradiooperator

A fun moment was when SP1NY called me and was amazed to hear me on phone. I replied that I was equally amazed to hear his voice and we decided that we stepped over to The Dark Side for the weekend. I often thought that CW is much more efficient and fun… 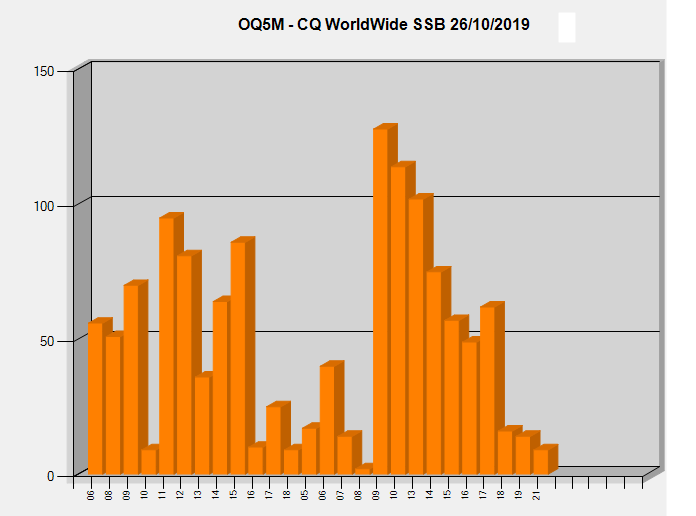 Sunday was quite a bit better but no by far what it should be. Two thousand QSO were far out of reach for me. Setup and location… The Belgian record for SB20(A) HP was 342k, set in 1996. I had no intention to break the record because the score was out of reach but a few good hours on Sunday boosted my score and suddenly it became in reach and I had a goal. I passed the 342k point late on Sunday and I hoped to work some more three pointers and multipliers for a safe margin to set the record after log checking. I hope 386k is enough margin.

I don’t know what to think. Would SB80 have been better? Anyway of I can set another Belgian record to my name, there is at least something meta-tangible that came from this weekend…