The plan was SB40. Last week PA/K7GK told me he was trying to do SB80 from PI4COM and asked for a shootout. Initially I agreed but afterwards I took a turn. QSO count on forty is double of what I can do on 80. I was looking for maximum fun (i.e. max QSO and max DX and max rate) so I declined the battle.

With last year’s result in mind, I told myself that 2500 QSO would be a result I don’t have to be ashamed about. The Belgian record for SB40(A)HP is a bit high and set with a four element yagi in 2009. Not impossible to break but the pieces of the puzzle have to fall in place for that.

From the CQ WW Records website; SB40(A)HP for Belgium.

Setting up was done last week for LZ DX so I had no work in advance. The days leading up to CQ WW a cold and flu-ish feeling developed. It peaked on Wednesday, got better by Thursday but was worse on Friday. I really felt ill. Sore limbs, pressure building in my head and feeling cold yet glowing. I spent the day on the couch under a warm blanket and took a few hours of sleep in the evening. It wasn’t completely over but it certainly wasn’t worse. So I could start the contest. Yay!

I was in doubt on whether to enter the online scores or not. I decided to do so and again this was a bonus throughout the weekend.

It soon became clear that there was something wrong with the ether. Signals on 7 MHz were weak. Even the usual suspects from the East Coast were only tickling the S-meter and not rocking it like they usually do. As the first two hours progressed I knew I had to abandon the idea of setting a new ON record. Even the proposed QSO count would have to be adjusted downwards. C’est la vie. The online scores for SB40 told me this was not a dipole man’s game. The pecking order was set and I just had to maintain a spot in the top ten. The leaders clearly had good stuff to spray their RF around. Their mult count was high and they seemed to run at high rates. And exactly that was my big frustration: I wasn’t logging enough contacts. A dipole at 23m and 1200W didn’t cut it under the given circumstances. Soon the average points per QSO dropped below 2 and then even lower. Bummer. I was having fun though especially since I came to terms with a laid back effort to support the scene and do what a contester does.

The night turned into day and around 10utc I decided to take a break.

Back in the shack around 1300utc. Say what? Japan on 40 just after lunch? And not ‘might that be a JA station modulating the noise somewhat?’ – no: solid copy. And not just one. Plenty! 9M2? Good! BY? Woohoo! Back into the game.

Saturday evening I took another break and a nap. Then I dove into the night. Around 1AM I decided to take a break because things were too slow and I didn’t find fresh meat for S&P. Those three hours of quality sleep in a warm bed really made the difference for the rest of the contest. I had abandoned the competitiveness for the ON record.

Sunday morning was OK but not more than that. Try to run, skim the band. Run again. S&P again. Around 10AM I decided to take a break again and a nap. I wasn’t really tired though and I thought that the warmth of the living room would do more harm than good. So I took the dog out for a good walk in the fresh (cold!) air. One hour and a few kilometer later the warmth of the pellet stove and a fresh homemade pizza (yes even the dough) nearly floored me. I took a shower and wanted to materialize the early opening to the Far East. It was there, and even better than the day before.

Later on Sunday afternoon I experienced a moment of nice long path propagation to z3. I know: with a dipole it’s hard to tell SP from LP but common wisdom and ham radio romantics dictate it had to be LP. Their SR, my SS, gray line… When doing SOAB this is the time you run USA on 20 or 15 like crazy and don’t bother about LP gray line. I wonder if this works on 80 too – with my simple low band stuff that is.

Sunday late in the evening the rate improved and much to my surprise so did the signals. I had a good run with mainly USA with some Far East in the mix. Sweet. Suddenly that ON record came in sight. How much was I exactly? 717k? If things continue for another few hours… The problem is there aren’t many hours left. But the rate remained reasonable with enough three point call in the log. And so I crossed the line. 2105 utc: bingo! Now I need to build some leeway so my record score can hold after log checking. 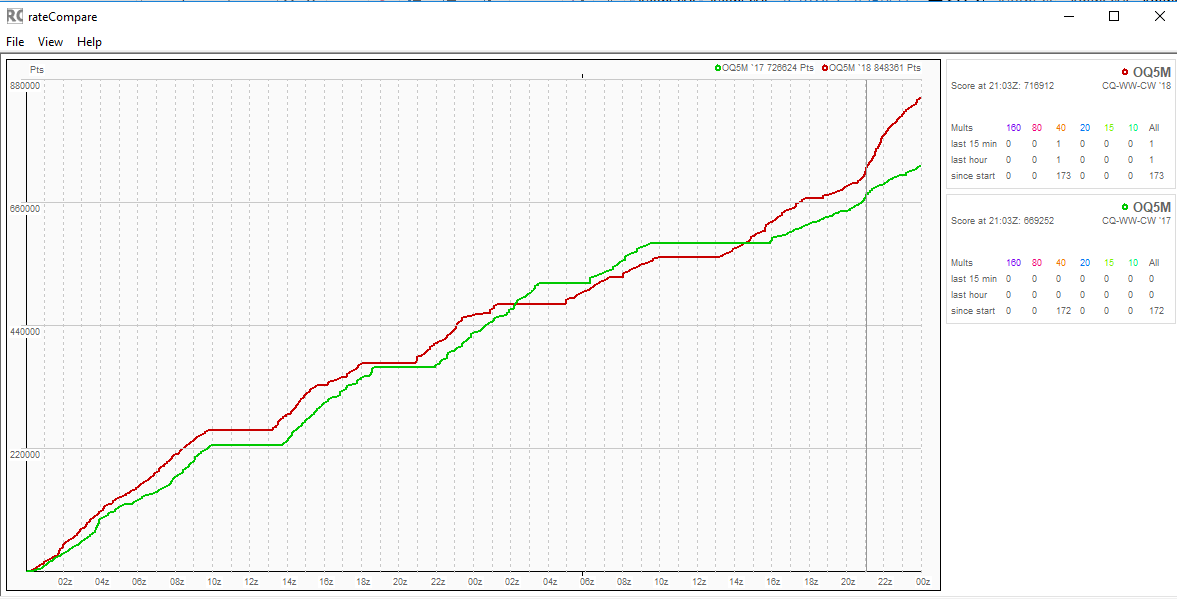 The above graph (courtesy of K7GK) compares the total score for 2018 in red to 2017 in green. The breaks more or less coincide. The magic happens in the last eight hours.

Late in the contest a ZP mult was spotted. I remember last year’s issue with that. It was tempting but I didn’t want to stop my final run. So you can imagine the euphoria when ZP5SNA calls me! I remembered that from the 2017 episode where I wrote: “Yes! In the last hour ZP5WYC calls me. Again YES!”. History repeating.

I decide to fight until the closing bell rings. Of course it slows down. With only twelve minutes to go I decide that since I need to make ten QSO to make up for one multiplier, I go and chase 5U9AMO which soon becomes DXCC 139. Another ten minutes until the curtain falls and I decide to S&P as if there was no tomorrow. In contesting, there is no tomorrow. I should put that on a T-shirt!

I switch everything off, ZIP the database and mail it to myself to have a backup in the cloud. I give myself a virtual pat on the back for another contest well done. Remember: it’s just a dipole and 1200W.

Monday morning 6AM local time. I need to get up and go to work. I feel like sh… When’s the next one?

I stayed away from cluster pile ups as much as possible. JT1DX was a pain but I worked him in the end. There were other situations too but I didn’t take notes. By the end of the contest, as usual, the rate slows down and each spot gathers a fierce impatient crowd. I abandoned the KL2R pile up because it was ferocious. Later Sunday night, I was trying once more but the usual suspects were at it again. WHY? WHY WHY WHY? In essence it’s simple: let’s all call once or twice at the same time, preferably a few tens of Hertz apart and then WAIT IN SILENCE and listen what the DX comes up with. Then ONLY ‘the chosen one’ gets to reply. Why on earth do stations keep calling and calling? Again and again. So frustrating. Egoism? Ego-tripping? A total lack of ham spirit for sure. And most of all: very bad operating. You can buy big yagis, 12k$ radios and 4kW amps but you can’t buy style and class.

It was so bad KL2R pulled the plug on his own pile up. Not without reprimanding the bullies (as if they‘d listen!) and who can blame him? My hope was, as usual, that if I kept on running I could get at least that one Alaskan multiplier in the log. And as usual my hope was not in vain. KL2R called me and operator N1TX was so kind as to spot my on the cluster. Thanks OM!

What’s up with my RX loops?

Something must have been different with propagation and the way signals arrived at my place. I have been using these two RX loops for two years now and I never heard them being so directive and helpful. I had diversity RX on all the time between the TX dipole and the RX loops. Both loops are fed into a remotely switched stackmatch so I can listen A/A+B/B. A is towards USA short path and B is at 40° favoring ZL and JA. Many times a station was hard copy and then it popped up when I changed the RX loop. For weaker and far away stations this clearly was an asset. On a few occasions I had troubles copying a JA and noticed the USA indication bulb was lit. Toggling to the 40° loop made the Japanese signal stand out. I don’t think I have ever benefit so much from these loops as this time. They offer some help on 80 and 160 but I never heard it so pronounced their as I heard it now on 40.

And dozens of one-shot rare DX.

Another CQ WW CW chapter written. I hope I get the ON record to show for it. At least for one year. This CW contesting game really never gets boring.