Status 04/11: I processed all cards in my possession for OQ5M and ON5ZO/P. I still have a bunch of cards for ON5ZO that need to be addressed. These are mainly for older QSO’s that I sent out cards for already.

There still is a very old shoe box full of ON5ZO cards. I wrote on top of the box: “ON5ZO cards – checked OK’. So I will take a few sample cards to see if I really already processed them. I surely hope so.

I now need to send out about 700 cards for OQ5M. I decided to print labels and stick them on paper cards. That way I can get rid of the stock of cards I had printed in 2006. I don’t like them too much and the picture doesn’t reflect my actual antennas anymore. Good riddance!

The good thing of waiting a few years to reply to incoming QSL cards is that you can answer three different cards confirming each one QSO with only one card.

Sometimes people make the QSL process more complicated than needed. There’s this JA station I have worked seven times on 15 CW. I confirmed four of those in 2015. Yet still there is another card for the same band/mode. 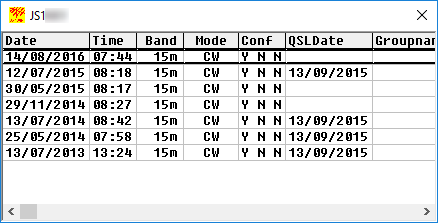 Or what to think of the station sending me a card with ‘PSE QSL’. So I sent my card. Then a few years later I receive another card for the same contact saying ‘TNX QSL’. A case of confirming the confirmation.

And so the QSL saga comes to an end. For now at least. ON4BHQ warns me that he has a considerable amount of buro cards waiting for me already – again…

2 replies on “The QSL saga continues”

Hint : cw qso’s made with morserunner do not need qsl management !