Zen and the art of Antenna Modelling

As much as I love to build simple antennas (and use ‘m of course!), I’m not too keen on antenna modelling. I have the classic ARRL books. When I started out people told me these were ‘must haves’. Well, I have ’m. ON4UN’s Low Band book is on the shelf too, a reference I consider way too theoretical for my purposes. A targeted Internet query results in tons of useful and megatons of less useful information. That is how I have made most of my antennas. I’ve got the basic antennas in my head right now.

I have bought a license for EZNEC somewhere around 2003-2004 according to my mail archives. I even went to a EZNEC workshop lead by ON7PC. With a crappy third hand salvaged laptop I remember. Laptops were still very expensive back then. BTW: ON4CCP / OT1A was there too.

I never made much use of this and I haven’t installed the old version nor an upgrade. Recently I have been trying again, mostly under impulse of M0MCX who regularly posts MMANA movies. Come to think of it: was ON7PC’s workshop for EZNEC or MMANA? I think I have the notes lying around somewhere… The good thing is that MMANA is free.

I have been trying a few things and learned a lot along the way. I’m not an antenna n00b, I just don’t model. But now I put my teeth in a very specific problem. Something I dabbled with in the past: a second antenna to widen the footprint in single band contesting. Already seven years ago – wow – that I tried that (it was with a Moxon for 15m). It wasn’t a big success and I remember it was too much hassle for what it gained me (pun intended). I must admit the antenna back then might not have been optimally constructed.

Anyway I thought it was time to give this another shot for a second 14 MHz antenna. There were a few options available. These options were limited: I have restricted space and the antenna needs to be small and light. No real yagis then. Which would be the best option of course but I don’t have a second tower.

I spent much time researching. I know from experience with my 40m flat top dipole that horizontal polarization is the way to go, IF YOU CAN REACH THE MINIMUM HEIGHT. I’m not looking for NVIS.

Achieving the proper height for a horizontally polarized antenna is the key to success.

I could use my field day winched tubular mast and reach 10-12m easily. But this one was constructed for wire dipoles and isn’t made for heavy antennas so a light two element yagi is the biggest I dare to go.

I considered a two or three element yagi with inverted V wire elements. But I don’t have the space to get the supporting ropes for the dipole legs far enough to keep the apex angle big enough.

Of course there is the famous Moxon. But I’m not too keen on buying yet another bunch of aluminum tubes for something that either won’t ever get finished or get used one time only to decide it isn’t the way to go.

You can also put a Moxon rectangle in the vertical position and make it all wire. That eliminates the need for a tall support (min. 10m above ground) and the tubing purchase problem. I could use two of my recently acquired Spider-poles to support both long legs. Rather that than starting to mess with cross-braces and the likes. There’s also the popular vertical dipole array but that seems to be a thing to put near salt water which is 120 km away from here. So even if I knew horizontal would be better, practical limitations drove me to the vertical. I modelled a few things, even a three element GP yagi each with a set of elevated radials sloping down. But the modelled output said it would not be worth it when it comes to gain and pattern. Especially since the triband yagi works great in all directions. I work lots of stuff on the back and the side of the beam too.

In the end I came up with a three element vertical yagi with three 12m fiber glass masts. The driven element being a vertical dipole, and a passive reflector and director. With some fiddling I even modelled the impedance to be capacitive (R – jX) so a coil across the feedpoint should make a 50 ohm resistive match possible. Yay! The plots looked great. But I was disappointed in the low gain. F/B is fine but I’m out for gain.

Time to get the hands dirty. Measuring and cutting wires, taping the copper wire to the fiber glass pole, winding a matching coil etc. Time to put the fiber glass poles up straight. Alone – as usual. It was not a very windy day but gusty enough to make the poles go banana-shaped. The real problem that day in July 2018 was the drought. We haven’t had much rain (if any) the last couple of months but it has been smoldering hot. The soil was bone dry and very hard. The screw in anchors didn’t screw in smoothly. Instead of driving the screw peg into the ground the soil came up as dust and the spiral didn’t have much grip. In fact I more or less just drilled a Ø 25mm hole. What a contrast with last winter when the lawn was wet. Read more about that here. A mild gust tore the 30 cm long anchor out of the ground. The fiber glass pole fell over. Luckily it fell into a beefy Robinia tree which broke its fall. No damage but it did break my spirit. I cancelled the work and went back to the drawing board a/k/a the modelling software.

Next thing to check: how does this three element vertical yagi, with less than 6 dB gain, compare to the yagi at 21m high? First: when in the same direction, it isn’t really an addition. It’s useless as the vertical wire yagi doesn’t even fill the gap between the two lobes of the yagi.

Now what if we point it the other way. The following plot shows a situation where the big and high yagi is facing East and the vertical wire yagi is facing West. Hardly a success, no?

This plot makes it clear that this isn’t really a useful addition to a great yagi. And I judged it too big and complicated given my garden (no place for guying).

I moved the three fiber poles away on the lawn and went looking through my stock of aluminum tubing and huge collection of antenna parts. I was almost convinced I had the parts for a HORIZONTAL Moxon. I’d have to use the big winched field day mast then. I was trying to avoid that in my already jam-packed garden but in the end it’s easier than three fiber poles that I can’t guy and much more stable with the huge homemade ground stakes. Lesson learned.

Let’s model. MMANA came with an example model of a two element yagi. That’s more or less comparable to a Moxon and will do for this theoretical comparison.

This could actually be something: 3L yagi at 21m, 2L yagi at 10m. The dip between the lobes is filled. Now what if I turn the antennas away from each other?

This is cool, no? If this model works in real life, I could have fun in SOAB especially right now: summer 2018, when 20m opens up to all over the world after my sunset.

But wait. Before doing all the work that might end up to be in vain… What about the simple flat top dipole λ/2 high? How does that compare?

First off: comparison of dipole and two element yagi, both at 10m high:

Truth be told: the difference in gain is not worth the hassle for me right now. Dipole modelled 6.76 dB and the yagi at 9.76 dB. So if we make the construction lighter by going from two element yagi to flat top dipole, we could raise the dipole two meter. What does that do?

I think these are similar results; the difference probably can’t be detected in a ‘real life on the air’ situation.

So what if we combine the dipole (at 10m for convenience) with the big three element yagi?

I think this is worth a shot.

About the 3 el vertical wire yagi: a nice theoretical modelling exercise. No more no less. Proof: 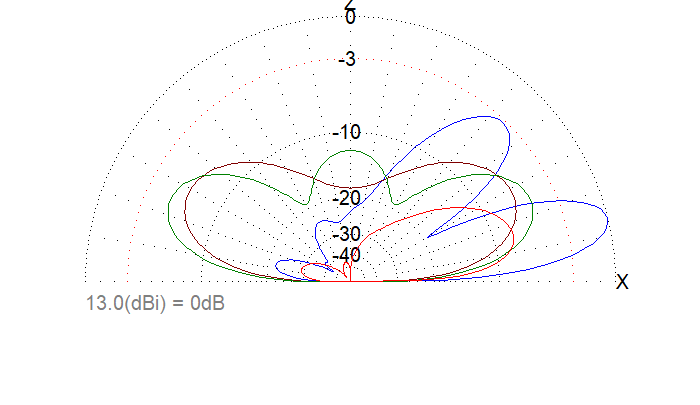 The above image shows the three element vertical wire yagi in red. Look for the tiny lobe. The blue plot is my three element yagi at 21m high. The green plot is a flat top dipole at 12m high, the brown plot is that same dipole at 10m high.

I should have done these modelled comparisons right away. Just for fun. Let’s move the three element vertical wire yagi to the beach:

In the end I settled for a flat top wire dipole with the feed point somewhere just above ten meters high. I used this in the 2018 IARU HF contest on the 14 MHz band. This dipole works great at this height. Not comparable to a yagi of course. It’s impossible to know the outcome of the contest if I wouldn’t have used this supplementary dipole. But I feel that it helped to cover some of the dark zones in the tribander’s pattern.

7 Responses to Zen and the art of Antenna Modelling