For the third year in a row: SB80. Propagation not OK for SOAB (or so I assumed), operator not fit for +40 hours of SSB mayhem. And phone on 40m? Thanks but no thanks. So I adhered to a ‘strictly for fun’ policy.

The station had been inactive since WAECW mid-August. The year 2017 won’t break any records except ‘historical low in radio activity’. Since then I booted the PC a few times to let Windows do it’s update business and I also let the amp run dry a few times to blow the dust out.

Wednesday my youngest son and I put up the 30° RX loop. He has yet to become six years old but he has a solid pair of helping hands. Hauling the fishing pole, strapping it to the support, taping wires: he has it nailed. The torque of my new professional cordless drill was a bit too much for his arm size so I assisted him with the drilling of the ground screw anchors. Even my wrist got almost twisted. Boy this is a potent machine! I knew I had to get one when my own old cordless drill couldn’t loosen some big screws that I tightened using the carpenter’s heavy duty machine.

In the evening I dug up the headset. My last SSB QSO dates exactly one year back: WW SSB 2016. Wow, it’s even worse than I thought, this lack of activity. Much to my surprise the voice keying worked right away. There was a time that the PC’s operating system messed with the audio routing settings. But that seems to be a thing of the past. I made a quick barefoot QSO with the USA on 20 with the beam down. Seems OK.

I had a few hours to spare on Friday afternoon so up went the tower. I shortened the 80m wire with a good meter and folded it back. That seemed about right to bring the resonance to 3700 kHz. In the evening I had a parent’s night at school so I got home around 9 PM local time. I went to bed not to shoot all my ammo at once the first night. I got in the shack around 2 AM UTC which was 4 AM local time then. I was about to call the first station and there the first problem popped up: the audio from the voice keying was seriously infested with all kinds of crap. It was less with the amp in standby. The problem disappeared when unplugging the headset’s MIC jack. So it was definitely a case of RFI through the MIC cord on 80m. Slowly the mist in my memory cleared: didn’t I had this last year too? If so, I must have written something about it. My online memory showed a picture and in my box of ferrite clamp-on thingies, there it was. Behold the RFI cure I made last year. I added another clamp just to be sure and as soon as it was in line with the MIC cord, the problem got solved. I forgot all about that. I must have been doing too much shit and too little ham radio! 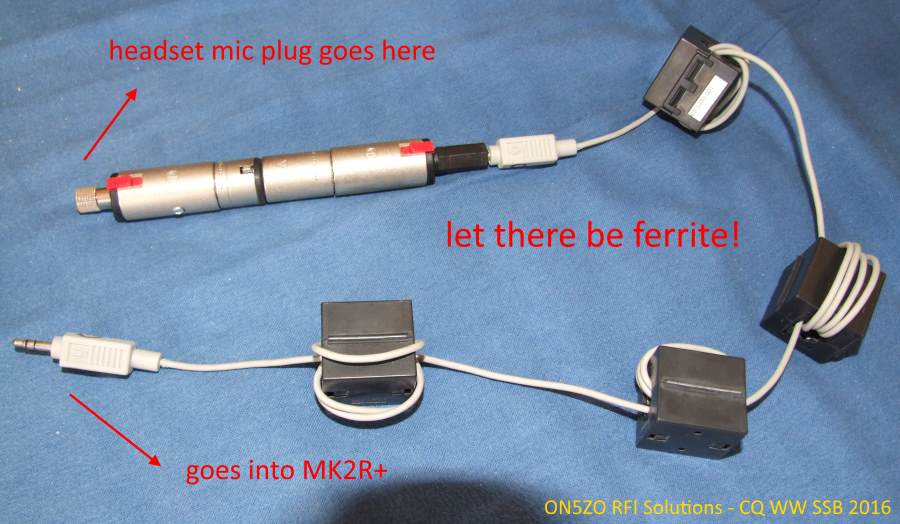 Remember this? I didn’t (at first).

Off to the races. On a crippled horse: after every QSO the keyboard froze. I can’t seem to catch a break. I have a 2.4 GHz wireless keyboard that has worked RFI-free since day one. But now what? The keyboard’s ‘batt low’ indicator wasn’t lit. So it’s not that. Nothing has changed. Or has it? With the renovation project we did last summer, I had to move some of the stuff behind the desk to remove the old big water boiler in a closet. Maybe something came loose? I walked to the other side of the desk and quickly added a ground wire from the GND bus to the PC’s case. I took the multimeter and checked for continuity between case and GND. I knew this was nonsense but at that point in time (remember: 4.15 AM local and about to start CQ WW) superstition got the best of me. It didn’t change a thing so I changed the two AA batteries. That did the trick. Maybe they were too worn out to even light the battery indicator? Good thing I bought a set of AA batteries last week. I exhausted the stock to get the kid’s toy train rolling again. I was running errands and thought: better safe than sorry. Ferrite and batteries saved the day night so off I went.

The first three hours of my contest on 80m were fun. The rate wasn’t too shabby. Fastest clock hour: 178 between 4 AM and 5 AM utc. On 80m phone? Cool! I worked plenty of Americans (111 out of 872). They weren’t really loud but I heard them well. Sunrise was disappointing and either the band died right after the sun hit the sky or everyone fled to shorter wavelengths.

Saturday afternoon I decided to try fifteen meters. The bandmap was packed and so was the band itself. With loud signals. I worked 150 DX stations in a pretty good run. Average 2.7 pts/qso. I tried 28 MHz too and worked ‘ten on ten’. Not much DX though. Fifteen was much more productive hence more fun.

I slept a bit during the day and returned to 80. Not much DX though. So at around 00.30 utc I decided to go to bed. We went from summer time (utc +2) to winter time (utc +1) and a few hours before sunrise I was QRV on 80 again. It wasn’t a real success: not much to be worked and almost exclusively one pointers. Bummer.

Sunday afternoon I decided to present myself as fresh meat on 20. Another round of fun for two hours, especially with the cluster spots. The rate really goes sky high then. Too bad it only lasts a few minutes. After evening dinner I took a nap. The plan was to work the last few hours on 80. But as expected, it wasn’t much fun. So I did a short S&P action on 40m. My ears bled! QRM, splatter, chaos. I looked for friends and people that had called me before on 80. After 25 QSO I decided I had endured enough sonic torture. I called CQ on 80 but I didn’t work much. With one hour to go I decided it didn’t matter if I was 50th or 51st in the ranking so I quit.

I know I’m repeating myself, but once again: SSB is a necessary evil while CW is a fine relaxation therapy. Still I had good fun and was glad to contribute to the scores for 1469 people. Propagation seemed better than anticipated. I got called by three Alaskans and called two Hawaiians myself. On twenty that is. Propagation on 80 (or should I say 75?) wasn’t too bad but either there was little activity from the east or I can’t hear it. Highlight there probably was being called by B9K. There was a JA spotted at the end of the contest but the pile up was just too messy to spend time there between the callers. My station isn’t up to that on phone as opposed to CW.

Speaking of hearing: those two RX loops really play well. There is a noticeable difference between both and it often helps to reduce that dreaded splatter. Another nasty side effect you don’t have in CW.

No CQ WW SSB would be complete without a German invasion by the Contest Bashers Net. Last year they launched the label Funkterroriste. Funny to hear them ranting away for minutes on end about nothing at all except how stupid the contest is and without a single callsign given. Speaking a bunch of languages pays off. This weekend my QRG was targeted by Überbasher DL6EAT (at least that’s what he told me) who clearly marked this date on the calendar to vent his opinion about the part of the hobby that we cherish. I forgot to pay my dues to join his party, as his QRZ page says “Our 80m-chat room is 3.653 KHz”. So 3653 is theirs and theirs only.

Another WTF? moment was when a 3V8 got spotted 1.5 kHz below me after I had been running for over an hour. Then some anonymous dude came to tell me I had to QSY because there was DX and I was too close to it. He had a German accent. And clearly a voice recorder and trigger-happy to fire it upon me.

One of the highlights was also a lowlight. When working K1DG on 80 he referred to our mythical Top Band QSO a few years back. That was in 2011. Here’s what I wrote then:

So back to 80 where I worked K1DG. He asked if I had a decent 160m antenna and if I wanted to QSY. I always accept QSY requests but now declined, remembering an unresponsive K3LR. I did not want to let him know what a crappy 160m antenna I have, the darn thing deserves some respect      But K1DG insisted that “we can at least try” and I agreed that he’d call me there. So I went to the agreed QRG but there was only noise. Told you so! I was just about to go back to 80 and tell him I didn’t hear him as he started calling me. Not loud but very clear. Twenty seconds later we both won a multiplier.

Six years already? How time flies. The highlight: that he still remembers it. The lowlight: kinda letting him down. Incentive for next year: put up 160m wire too and work Doug.

How on earth did I manage to do this contest-thing +40 hours on all bands a few years ago? I clearly lost my mojo. Anyone know where I left it?