Yet another year has passed. A year that started bad for the hobby and the OM. Storms, lightning, a general lack of interest and energy for the hobby. A ‘been there, done that’ feeling. All this made for little activity the first half of 2016. Luckily the tide turned and I found a renewed interest in the hobby by not setting goals except for having fun. And from July on, there has not been any interference from the weather either. 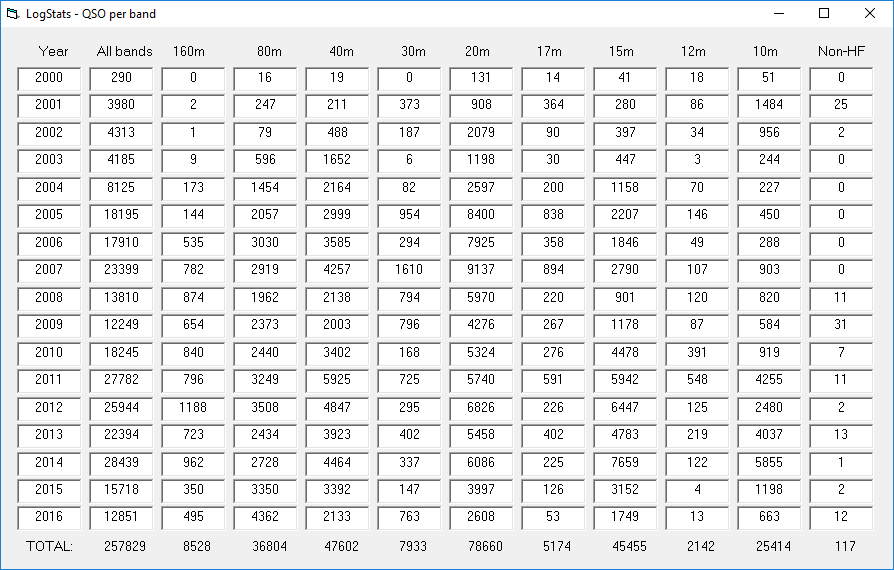 The QSO count for 2016 is on the low side. Even lower that I estimated. The reason is that I didn’t do much before July. I also didn’t do all band efforts CQ WW (more than 8000 QSO in 2014), and I skipped WPX and ARRL. These contests usually provide a few thousand contacts too.

The breakdown by band clearly shows the decline of the solar cycle. Look at the 10/12m numbers. But then again: almost 600 QSO more on 30m than in 2015. That is a clear sign of ON5ZO having fun as a casual DXer. This is also reflected by the huge number of contacts on 50 MHz. A 600% increase compared to 2015.

The breakdown by mode is not worthy of its own image. Telegraphy still the way to go: 74.33% of my activity is CW. I made 215 RTTY contacts in 2016. That’s a lot if you know that I only made 270 RTTY contacts between 2010 and 2015, with two years of zero RY QSO. Again a sign of me just hanging out making some noise on the bands.

I made at least one QSO on 52 different days.