Thanks to folks running the CQ WW contest, we now have the max rates available for the last decade. Guess who’s dominating the CW ranking for Belgium (ON)? 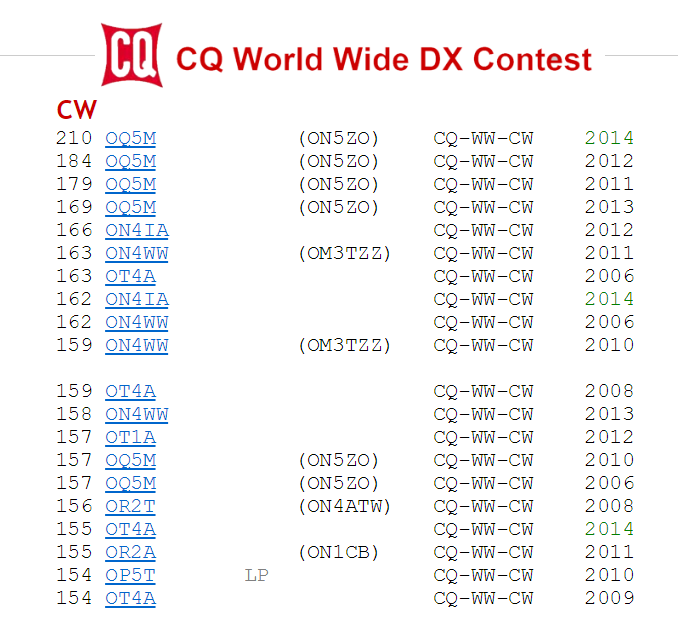 Yes I am pretty excited. But most of all amazed. And honestly it surprises me that it’s on 80, generally considered not to be an easy band. And with a good percentage of DX 3pt contacts. A massive run on 3505 interlaced with ten contacts on 40m. On a piece of 2.5mm² copper wire hanging skewed from the tower, and two tuned radials about 2.5m high. No ridiculously big yagi, no directional 4SQ, no 120 radials, no beverages, no remote RX.

So how does this compare to countries around here? Much to my surprise I beat the top Single Op HP CW rates in plain G-land, LX, DL, F, PA, SP, EA, I, OH, ES, OZ, SM. I stopped looking there. I find this intriguing.

Oh well, it’s not that I have superhuman skills. It’s just a matter of copying a call, typing it, send 5NN 14 and on to the next. Luckily there is a next. This would be impossible without a constant flow of callers. So: Thanks to those who call me!

Geez- 210 QSO in a single 60 minute hour releases a heavy dose of adrenaline. And it’s addictive. Imagine being in a sweet DX spot near the beach with DXCC monopoly…

As a closing note: I’m nowhere to be found in the SSB ranking. It’s not that I don’t try. Or that I couldn’t do it. It’s just that the exact same setup doesn’t cut it on phone. Let this be a proof for the non-believers. CW 4 EVER!