What was that? Crazy things happened. My best score in this contest was in 2011. I never thought I could repeat this during Cycle 24. So I approached this contest without official expectations although not making 4000 contacts would make me unhappy especially since the days before the contest propagation seemed more than OK. I really looked forward to CQ WW CW, the MoaC – Mother of all Contests. The plan was to do what I could but most of all have fun.

I took a nap Friday night and set the alarm at 00.30AM local time, half an hour before the start. I woke up, or rather got out of bed but I felt like the contest had been running for a day already. I stood in the shack looking outside wondering why we do this to ourselves. Another feeling that usually pops up after thirty six hours. Faint heart never won fair lady so I started on 40m like I always do in CW. You can’t do sh… in a phone contest with a rotary dipole but it is a jaw breaker in CW sitting at 23m AGL. It works like gangbusters as they say.

I really can’t remember much except I was having a ball and I was utterly excited about the rates. When moving to 80 after a few hours, the rate exploded and soon my ‘max cw rates for Belgium’ will need an update because it seems I went well above 200 for a while. Too bad I couldn’t repeat that later on. With a rate near 200 and still working a bunch on radio #2? I keep on amazing myself here  :o)

I got through the night into the morning. Top Band was not productive. Not much EU and almost no DX. As expected. I can’t remember much of Saturday either. I ran and ran and ran and did the occasional S&P session. I wonder why I keep being assisted because most of the time I just skip the brutal messy cluster pile ups. The nice thing is that many and really many of these rare DX mults come to work me and believe me this is a kick. 3B8, 8Q7, ZF1, E5, KL7, KH6, VK, ZL and many many other DX operations come and call me. Then their call appears in the bandmap close to my running frequency and another unruly cluster spot pile up emerges.

It’s not only the DX, it’s also the MANY MANY friends calling in. From nearby in EU to the remote W6. I won’t drop their calls here because I don’t want to forget anyone. But you all know who you are. All these friends we almost never meet in person but still work over and over again. Or exchange mails with. Or read and comment on their blogs. It takes the fun and satisfaction to a higher level. And yes I grab the paddle and throw in a short ‘hello’ and a name and a 73 CU. Because hearing their calls is good. It’s being part of the brotherhood of ham radio nutcases. 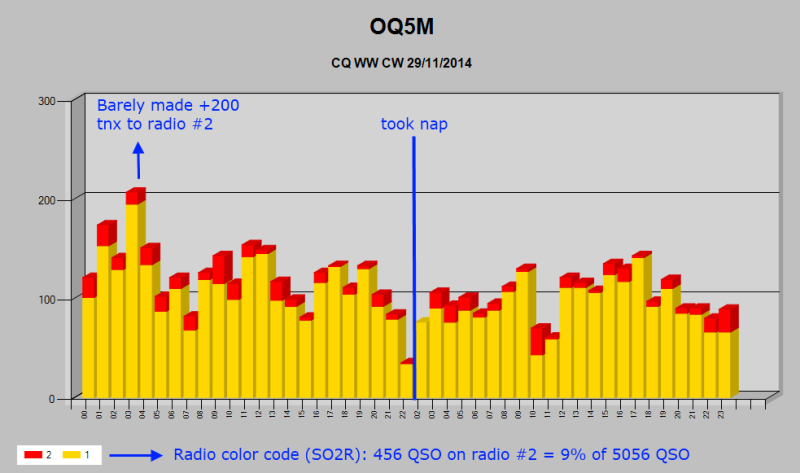 The average rate was well above 100/hr as I dove into Saturday night darkness. Around 2200 utc things slowed down. This was as expected and as experienced year after year.  But I wasn’t tired. Yet I decided not to make my usual mistake. That is going on for a few slow hours, sweating it out with 1pt EU and then crash around 4AM local time. I end up on the couch then and miss sunrise and the point where things pick up again. So I cashed out and hit the couch in the living room, setting the alarm to ring three hours later around 2.30AM local time (0130utc). Three hours being a double ninety minute sleep cycle as advised by the experts. Around 2AM utc I got back into the shack and found a whopping 160. I worked many Americans. Seventy eight – 78! Who’d have thought that after the first night? I got called by two zone 3 stations and checked QRZ: actually they ARE in Cali. New WAS on Top Band! Another batch of juicy DX and probably new ones for DXCC called in. ZF1A comes to mind. I couldn’t believe it. On my silly linear loaded L wire, with the horizontal part sloping down to only eight meter above ground. That’s a ham radio experience hard to beat: high rates and getting called by DX multipliers, from central Belgium with a very modest semi-fieldday setup. The armchair copy ZL multiplier on 80 was the cherry on top. Hell yeah! I stayed on 80 until it was empty, then did the same with 40. Then I had to go higher but again: it’s all blurry.

Somewhere in between I got called by ON3DI. Contests come and go. Scores go up and down. But the fact that ON3DI is getting his feet wet in CW is an absolute milestone. I’ve witnessed his first steps in the hobby. I’ve seen him mutating into a contest addict. But I guess it’s fair to say the cat is out of the bag now. If he experiences firsthand how easy it is to work DX with simple antennas and low power compared to being CQ’ed in the face on sideband, I guess he’ll be a lost cause too. Welcome to the exciting world of CW contesting!

Thirteen years later he might end up like me. Funny observation about myself. Sometimes I was trying to pick a call from the cluttered mess on radio 2 when my CQ on radio 1 ended. There was a caller answering but I didn’t consciously copy his callsign because still focusing on the other radio. Yet I type in whatever comes into me and it turns out to be correct. Now THAT is weird. Subliminal copying. This might be trivial to some but to me it’s a sign of actually knowing CW. It doesn’t always work. Knowing hundreds of callsigns helps too. After all these years working the same guys, I have the SCP file in my head so to speak. It hasn’t always been like that. I remember my first steps in CW contesting. Total focus was required and the least distraction was fatal. On the other hand it’s only fair to admit that sometimes the opposite happens too. A total lock up of the grey matter decoder. Even the loudest caller with the simplest call does not get processed by the brain. Heck CW contesting is so much fun!

As Sunday morning moved along I had a hard time keeping the rate up. It even dipped below 100. I took a short break for a quick lunch. The kids were glad to see me. Now is the time to mention the unconditional support of the XYL. Thanks for that. Running the household all alone, entertaining two toddlers and most of all: keep them away from daddy in the shack – it’s not exactly the definition of an enjoyable family weekend. At regular intervals she shoved a plate under my head with a snack or a sandwich. The kids don’t quite get it. Daddy is at home yet daddy does not want to come out and play. And daddy chases us out of his radio room? But daddy, all we want is to see the lights blink! Being the amp’s LED bars. Who knows what the future will bring regarding my kids and ham radio. I won’t push ‘m anyway.

A shout out to my n°1 fan ON3DI. He was following the online score board and once in a while he sent an encouraging text message. As Sunday noon progressed he told / typed out loud what I didn’t dare to think of. That the 5k QSO mark was within reach. But only if the current rate could be maintained until the end of the contest. A couple of really fast three point hours to the USA with the occasional double mult thrown in gave the score total a boost. I was convinced that 5k was possible with another sustained USA run on 20. The thing was: that run didn’t come. I guess the US of A guys were still enjoying the higher bands. But these closed down rapidly on my end. Even cluster spots didn’t help me out. It would bring along a dozen contacts but then it would slow down again. Too slow to reach 5000 contacts. I kept calling CQ on 20 and hop the other bands. But ten and fifteen were closed. Now what? It’s tempting to start spotting yourself but I refrain from such silly practices. Although it became common practice it seems. Even in disguise.

The last hour and a half of the contest was crucial. I was tired, I had enough, I needed to empty my bladder – urgently. Keep your eye on the prize! Five thousand QSO will bring relief in both ways. Since twenty meters was not helping me in any way to get to five thousand QSO, I had to do something. But what? Since there was plenty of life on forty meters I tried my luck there. I found a clear spot but after a few CQ CQ CQ I got jammed between to stations QRMing me. Rate almost zero. That was very frustrating. I was about to throw the keyer to a jamming lid’s head. I kept on calling CQ and clicked from spot to spot on 80 and 160. I don’t always do that – I do tune in between spots and often find unspotted sweet stuff but this time I needed to go fast and clicking spots was the only way not to waste time for a station to ID and find out he’s already in the log. At 23:38 I logged G3TXF on 160 for #5000. Booyah! For the last twenty minutes I decided to stay on 160 because it had the lowest QSO totals thus the most chance of logging new stations. I even added two multipliers on top band.

Five thousand QSO. I can’t believe it. With a simple setup and no excessive power. Of course my multiplier count is low. That is because I like to run and don’t like to waste time in packet spot pile ups. That’s where more and bigger hardware could help. When the guy on the other end is slick I often can outsmart the pack by calling slightly up or down. Wasting time is one thing, but it also frustrates me, the poor operating practices. On a few occasions I worked the DX while a EU station was still calling and calling. That’s why I just don’t bother to work big DXpeditions anymore.

CQ WW CW 2014 will be hard to beat from here. What are the odds propagation will be anyway near this year’s conditions on HF? But that’s what I thought about 2011 too…