The end of summer

Last week my summer holidays came to an end. Summer by calendar, not by weather. July was mediocre but still FB compared to a cold and wet August. I’ve been working on a simple antenna project for three weeks now. Basically it’s just a wire (teaser for future item here). An afternoon project, maybe less if all goes to plan. But each time I gear up to take it outside, it’s either raining cats and dogs, or there’s thunder roaring. Very predictable but this week, the first week of the new school year, has been warm, dry and calm. So I thought: why not hang up the wire and see if it works on Friday afternoon? You guessed it: chance of showers and even a local thunderclap *sigh*. Two weeks ago I did three small walks with the dog on one day. Each time I left with a dry blue-ish sky and returned wet after twenty minutes.

Looking back I haven’t done much. Still I didn’t sleep or slack but I didn’t do much work. Mostly playing or walking with the kids. Sometimes voluntarily, sometimes under light pressure. I spent most if not all of my spare time from March to end of June working in the garden. I’m very happy with the result. My plan was to do nothing but ham radio in summer. And lots of BBQ. I did three grill parties in July and one the first week of August. Apart from that it was more hot tea and steaming stew weather. Ham related I only did the 80/160 antenna and three contests. Three? Two and a quarter. Both IARU and EUHFC were done in style but for WAECW I didn’t had the courage this year. When working my ass off in spring after being forced to skip many contest due to hard winds and storm, I vowed to be on the air almost daily during my holidays. To make a bunch of contacts here and there. I ended up logging ZERO contacts apart from the three contests. Culprit was of course the WX with almost constant ‘chance of lightning’ so I didn’t even bother to connect the coaxes. Why do so if you only need to unscrew or unplug everything a few hours later. Or in the middle of the night.

I also did a small construction project for a fellow ham. Per his request I won’t elaborate about it. It involved heavy metal, a winch and a hinge. And some drilling and welding. Quite satisfactory indeed.

I’d almost forget I used to actually be an active contester. To my surprise I ended quite high in the WPX SSB this year. Second place in the tribander class. Of course I am no match for stacked long boom monobanders and power splitters in three dieactions at once. But there you go: in my own little league and with no particular effort, I ended up #2. I didn’t even remember I participated in that contest. I claimed 1300 QSO and got credit for 1293. That’s 99.46% accuracy in a serial number contest. 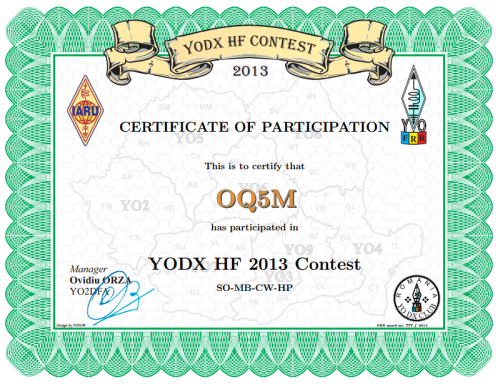 And recently the YODX guys sent me an electronic certificate for their 2013 contest. Courtesy dictates that I’d be on this year too. With the tower nested and the tribander only at eight meters, I made 348 contacts. It always amazes me that with the tower low you can still have some fun (even with the big amp off and 500W out of the small amp). But nothing beats the antenna high up, the low band wires in place and calm WX with magnificent propagation. Let’s see what fall brings?