Don’t worry – this site isn’t going to morph into a meteorological blog. But you know by now that stinking WX bothers me a lot and quite frankly it’s been smelling putrid lately. Strong winds and even stronger winds. With lots of rain but that doesn’t bother me as much as the wind does.

Yesterday between 4PM and 5PM I was heading home from visiting a friend about thirty kilometres away. I left there with the car’s temperature meter displaying 12.5 °C outside. Which is ridiculous of course this time of the year.

Soon the sky turned pitch black and at regular intervals pale white. Lightning! Lots of lightning. And rain. So much rain traffic slowed down to a halt (except for some crazy MFers). This sudden thunderstorm followed me on my way home and half an hour later the temperature showed 5.0 °C. More than seven degrees lower in less than thirty minutes. In the mean time it started hailing. It sounded like a bulldozer was pouring marbles over my car and the impact at 50 km/hr was deafening. When it stopped there was a carpet of little white marbles stretched out over several kilometres. Radio news started reporting severe damage over the whole country. I was glad to see all my antennas survived. I think my QTH dodged the bullet. 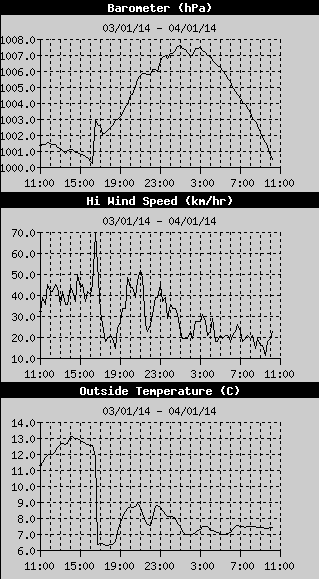 What I really wanted to show is the above. It fascinates me. I compiled a few graphs from an online weather stations about 10 km from here. You can clearly see the sharp drop in temperature coinciding with a peak in the wind gust speed.
Again: no worries, there’s ham stuff in the pipeline!