Now that the old year is behind us, I have the feeling that 2012 is the year that has passed the fastest for me in all my life so far. I knew that I wouldn’t have much time for ham radio in 2012. And the lowest number of days I was active reflects this (Y2K doesn’t count since I got my HF ticket late October).

How many days active (making at least 1 QSO).

Still I made almost 26k QSO. I did not expect that and looking back I wouldn’t have guessed so many contacts would have made it in my log. Only 635 non-contest QSO on the WARC bands. Which means I did almost zero casual DX’ing and 97.5% of the contacts is made in contests during the weekend. Contests can be planned and the weekends can be reserved. Which is exactly what I did earlier this week: take the virgin 2013 calendar and block about twenty weekends or so, some of which are mandatory (UBA 2x, WPX 2x, ARRL 2x, WW 2x, RDXC, WAECW, IARU, EUHFC)  and participation in the other depends on time management, the mood, propagation and WX (wind and lightning). 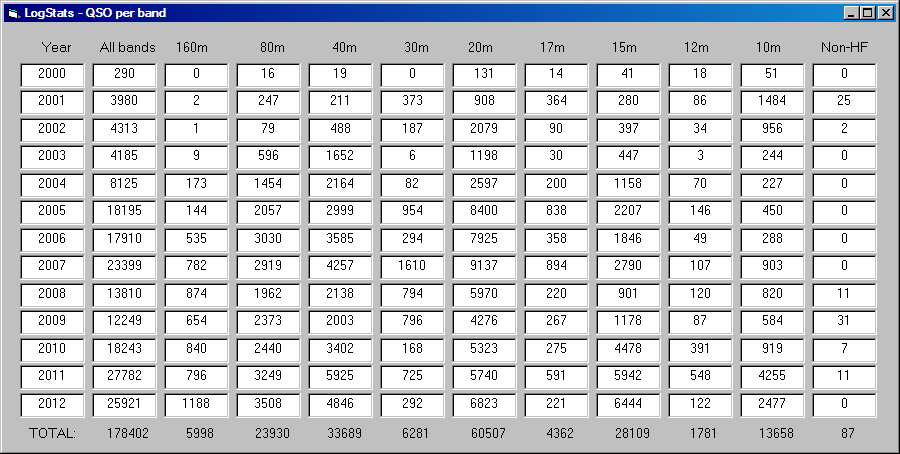 The number of contacts on ten meters is also cut in half. Just like propagation on the highest HF bands from end 2011 to 2012. What’s up Cycle 24? And I have no clue where all those Top Band QSO come from!

Two thousand twelve was a very busy and stressful year with quite a few unforeseen domestic inconveniences (things do break, jam, leak, crack…) and one predicted (the birth of QRP #2). Although I wouldn’t call the latter an inconvenience. This all means that when there is a slot of free time, I did not always make it into the shack like years ago because there is a long list of tasks waiting to be executed, problems to be solved, broken items to be fixed, dogs to be walked, kids to be played with. Diaper Duty! Another issue is the weather. Normally I am very active 24/7 the last weeks of December. This year the wind prevented me from doing so. I lowered the tower on Monday 24th which was a good thing because the night from Monday to Christmas, it was a stormy night here with strong gusts and it has been very windy ever since. A few days ago I was pouring water from a can into the dog’s drinking bowl. I poured it from waist height and the water landed not in the bowl but one meter further. The wind just blew the water away. I seem to remember the very bad spring made for a lower tower and hence no DXing fun too. Summer wasn’t great either with wind and constant T-storms or at least the threat thereof. I hope for calm, dry and sunny weather in 2013. 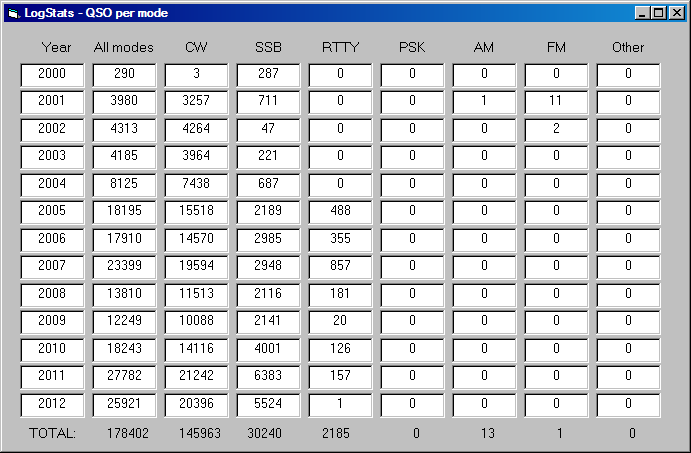 As you can see from the figures, I am still very CW oriented and only sometimes I hook up a microphone. EL2LF is my only RTTY contact because I support the voodudes. Too bad they quit.

Surprised to see that after more than five years, my blog here is still up and the number of hits has reached a constant value. Very kind of Bas PE4BAS to put my in his list of favourite blogs. He’s right though: not too much pictures here. There is a reason. Laziness. When I do take pictures, I need to hook the camera up to the PC, copy from CF card to laptop, resize pictures etc. And a big part of the items are written during my lunch break when I don’t have my camera at hand to unload the images. Another reason for not showing pictures is that I’m not always proud of how things look. My mechanical skills and tools are very basic and I’m the king of the “temporary solution become permanent”. I try something by hooking a few things up. If it works I tell myself that I’m going to remake it, nice and clean. Just like the temporary 80/160 feed point that has been working nice for over three years. Or the way I installed the RX loop for CQ WW CW. Believe me, you don’t want to see how I quickly put that together to test. Yes it works but it looks like sh…

For 2013 I hope to have more time outside of the contests. Planned projects are (in no particular order):

Furthermore I really miss a permanent WARC antenna. The homebrew triband wire dipole à la inverted V works fine but I always need to fiddle with ropes and pulleys to get it up. I gather all my courage for a contest to get the fieldday style station ready to go to war but for some DXing with unknown outcome, I’ve come to the point where I just leave things as they are and don’t bother. And don’t make any contacts. The Fritzel rotary dipole was a killer antenna for size and simplicity. Furthermore it was always available and played well until one of the traps went missing in action two years ago (link). I’m glad there is the rotary dipole for 40m now which again is the best I ever had for that band and it’s always there and plays well even when the tower is only cranked up two out of three levels in case of strong winds. And a contest antenna is more important than a casual DX WARC antenna given my operating style. Still I really love making casual DX contacts and do some smalltalks in CW. So I find myself more and more contemplating the SteppIR solution. One antenna with gain on all HF bands from 7 MHz and up with 50MHz as a bonus. Expensive yes but that doesn’t bother me if it turns out to have a big ROI, being the fun factor. Then again, I just looked it up. About €3700 for the three element, and €5400 for the four element. Pretty steep for what it is. The cumbersome aspect worries me more: it seems like a helluva job to wire it up from the shack up to the tower. But this is a one time only event. What about the durability of the moving parts? I’m petty sure the MTBF of a good stepper motor is long. But what with the conductive strip? And this is the point where I abandon the SteppIR contemplation…

I wish you all and myself a healthy and succesful 2013. May the lower troposhpere breeze gently and the ionosphere be a superconductor for RF. May all power devices keep on working and all aluminum stay up where it belongs.